This new edition of Raj Pathria's classic graduate statistical mechanics textbook includes new sections on Bose-Einstein condensation and degenerate Fermi behavior of ultracold atomic gases, and two new chapters on computer simulations and thermodynamics of the early universe. The authors have also added new sections on chemical and phase equilibrium, and expanded their discussions of correlations and scattering, quantized fields, finite-size effects, and the fluctuation-dissipation theorem. We hope this new edition will continue to provide new generations of students with solid training in the methods of statistical physics. The web page for the book can be found at http://www.elsevierdirect.com/product.jsp?isbn=9780123821881 or by going the Elsevier web site http://elsevierdirect.com and searching for Pathria or Beale. Associated Mathematica files for solving the two-dimensional Ising model on a finite square lattice can be found on the Companion site. Here is the direct link. The corrections to the first printing can also be found in the errata file on the Companion site. The most up-to-date corrections are posted in the errata file on this site. These corrrections to the text will made in the second printing. Course instructors who have been issued login information from the publisher can download a solutions manual by clicking Manual. Here is a direct link to the instructor login page.

Link to a University of Colorado Boulder promotional video.

Link to an episode of Stan Lee's Superhumans on The History Channel featuring Darren Taylor, a.k.a. Professor Splash, who can dive off a 10 meter platform into a kiddie pool with 12 inches of water. I provide the physics analysis.

Try the States of Matter Java Applet on the Physics Education Technology Web site:
Explore the solid, liquid and vapor phases of neon, argon, oxygen and water.
The PhET simulation was based on molecular dynamics code I developed long ago. 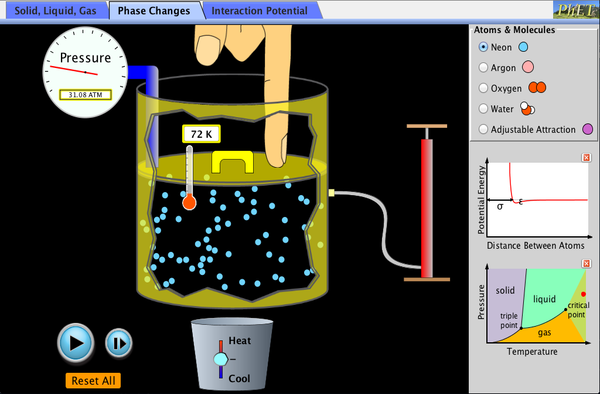 My recent work includes a calculation of the exact distribution of energies in the two-dimensional Ising model. By using Kauffman's generalization of Onsager's solution of the two-dimensional Ising model, one can calculate the exact form of the partition function in the form of a low-temperature series expansion. Since the coefficients of the low-temperature series give the number of different states with a given energy, one can use the coefficients to calculate the exact distribution of energies at any specified temperature. This solution provides an exact distribution that can be used to verify the accuracy and convergence of Monte Carlo simulations.

I have recently developed new class of pseudorandom number generators based on Pohlig-Hellman exponentiation ciphers. The method generates uniform pseudorandom streams by encrypting simple sequences of short integer messages into ciphertexts by exponentiation modulo prime numbers. The advantages of the method are: the method is trivially parallelizable by parameterization with each pseudorandom number generator derived from an independent prime modulus, the method is fully scalable on massively parallel computing clusters due to the large number of primes available for each implementation, the seeding and initialization of the independent streams is simple, the method requires only a few integer multiply-mod operations per pseudorandom number, the state of each instance is defined by only a few integer values, the period of each instance is different, and the method passes a battery of intrastream and interstream correlation tests using up to 1013 pseudo- random numbers per test. We propose an implementation using 32-bit prime moduli with small exponents that require only a few 64-bit multiply-mod operations that can be executed directly in hardware. The 32-bit implementation we propose has millions of possible instances, all with periods greater than 1018. A 64-bit implementation depends on 128-bit arithmetic, but has more than 1015 possible instances and periods greater than 1037. See http://arxiv.org/abs/1411.2484 and http://spot.colorado.edu/~beale/Pohlig-Hellman.

"Exact Distribution of Energies in the Two-Dimensional Ising Model", Paul D. Beale, Physical Review Letters 76, 78-81 (1996). You can download a Mathematica routine that will calculate the exact partition function for the two dimensional Ising model on an nxm lattice. The program determines the coefficients of the low temperature power series expansion. IsingExactMathematica.html

Check out my daughter Melanie's collegiate and Pro cycling results.

Interested in flying? Have a look at my Beechcraft Bonanza.

Return to the Department of Physics Home Page